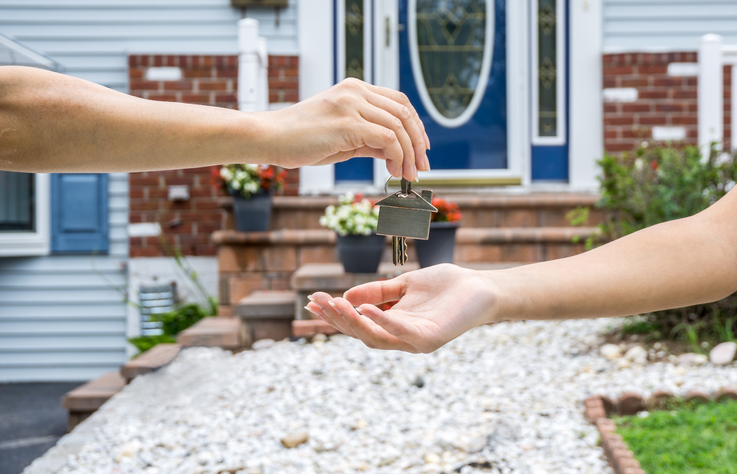 Handing Over the Key from a New Home

Canada’s national housing agency said Wednesday that the 47 per cent decline in the country’s insured mortgage market year-over-year in the third quarter is the “new normal level.”

The Canada Mortgage and Housing Corp. said in its latest financial report that it provided mortgage loan insurance to 67,915 units for the three-month period ended Sept. 30 compared to 127,991 units during the same period a year ago.

Steve Mennill, CMHC’s senior vice-president of insurance, said decreased volumes have been steady throughout the year as a result of the new mortgage rules announced by the federal government in the fourth quarter of 2016.

The rules require all home buyers with less than a 20 per cent down payment to undergo a stress test to ensure the borrower can still service their loan should interest rates rise, or their personal finances fall. This cut into the purchasing power of some first-time homebuyers.

“We think we’ve found the new kind of level following those changes that were made close to a year ago,” Mennill said during a conference call Wednesday, November 29, 2017.

“So we’re fairly confident that the level of volume that we’re seeing now is the new normal level.”

CMHC said the 47 per cent drop in total insured volumes in the third quarter was primarily due to decreases in transactional homeowner and portfolio volumes. The agency reported that transactional homeowner volumes decreased by 13,966 units, or 30 per cent, due to lower purchase and refinance volumes, while portfolio volumes decreased by 50,388 units, or 90 per cent, mainly due to the market adjusting to new pricing as a result of the increased capital requirements.

As a result of the lower volumes, CMHC said its total insurance-in-force decreased to $484 billion as of Sept. 30 of this year, a decrease of $28 billion from the end of 2016.

Mennill said during the conference call that lower mortgage loan volumes have impacted staffing requirements within CMHC’s homeowner underwriting group but that increased volumes in multi-unit residential have offset these impacts.

Charlie MacArthur, CMHC’s senior vice-president of regional operations and assisted housing, added that the National Housing Strategy will also require homeowner underwriters at the agency to work in assisted housing.

“There will be similar skills required in the assisted housing side of the business as that business grows with the announcement of the National Housing Strategy,” he said.

Prime Minister Justin Trudeau unveiled the $40-billion plan on Nov. 22, which includes a promise to introduce legislation to make housing a fundamental right. He also promised a new, portable housing benefit for low-income households, and to prioritize funding for the most vulnerable populations like women fleeing domestic violence.

CMHC said that Budget 2017 proposes new federal investments in excess of $11.2 billion over 11 years, as well as preservation of funding for social housing and new low-cost loans to support affordable housing under the new plan. The agency said these figures will build on additional federal funding of $5 billion made available through Budget 2016, a portion of which is reflected in CMHC’s 2017 expenditures for housing programs. CMHC said it will deliver $9.1 billion of this incremental federal funding investment.

In its quarterly report the agency also said that it has seen an improvement in the quality of its mortgage loan insurance portfolio compared to a year ago.

The agency said its overall arrears rate was 0.30 per cent in the third quarter, which is down from 0.32 per cent a year ago.