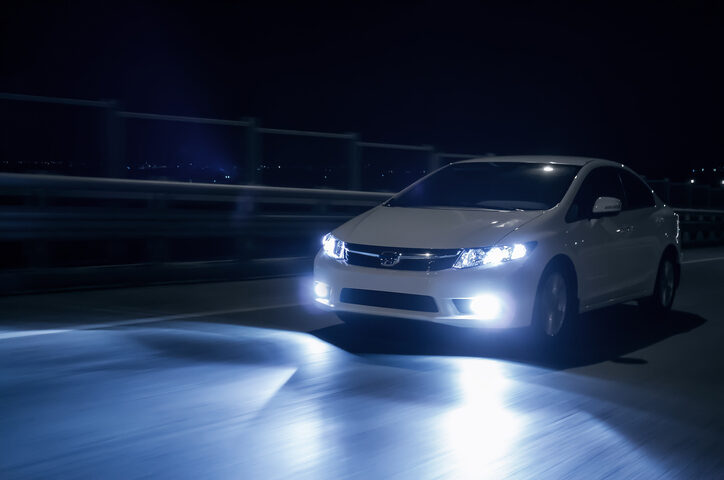 Those Blinding Blue Headlights… The situation may be from one of three causes: poor design, a standard high intensity discharge (HID) headlamp or an improper retrofit.

To encourage vehicle manufacturers to improve their headlight designs, the Insurance Institute for Highway Safety (IIHS) has begun to rate vehicles for headlight performance. According to them, headlights are still an afterthought on most vehicles in 2020, with only 6 of the 156 models having good-rated headlights across the board.

Tungsten filament sealed beam headlamps originated in 1940. They were improved by the introduction of the halogen sealed beam in 1962 and the replaceable halogen bulb in 1983. This change allowed for greater high beam intensity.

The next significant improvement was the HID headlamp that used a glass capsule of glowing gas to produce light instead of a heated tungsten filament. The system can be two to three times more efficient at producing light than the tungsten bulb. They produce more light in the blue end of the spectrum compared to the filament bulb which tends more toward the red.

It appears that it may be the blue tendency that bothers drivers (especially older drivers) looking into these lights. Research is finding that the HID lamp does produce more discomfort glare but the reason is not currently clearly understood.

The current innovation in vehicle headlighting is the LED sealed beam.

Discounting the installation of lights that are either not meant for automotive use, eg: aircraft landing lights and non-standard LED lighting purchased on line, we have improper replacements widely available at local merchants. The words “for off road use only” or “check with local authorities before use” are often buried, unnoticed, in the packaging.

LED and HID capsules made to fit standard headlamp housings are available for purchase. These are illegal for use in British Columbia because they produce even more glare than proper HID lamp systems.

In the HID systems you have a capsule, reflector and lens all designed to work together. Capsules inserted into standard housings and reflectors do not distribute the light properly. This definitely affects oncoming drivers and could prevent proper vision for the driver of the vehicle fitted with them.

The LEDs in sealed units are not removable and the entire assembly must be replaced when they fail.

If you have a complaint about headlamps, Transport Canada is the government agency responsible. If you want to learn more about why headlamp modifications are dangerous, visit Daniel Stern Lighting.

DriveSmartBC: Where better than average road users satisfy their curiosity.